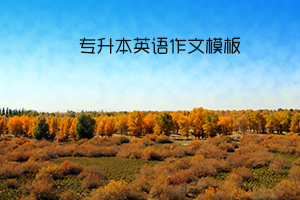 It is a very eye-catching photo in which…… . What makes this picture extraordinary is_____, which clearly indicates_____ .

The effect of such communication can be best exemplified by _____ .

While people belong to nations, cultures know no boundary. _____is not only featured by_____ ,but more importantly, by_____ . I firmly believe that is contributing, and will contribute more to the world’s peace, development, and prosperity.

The drawing virtually reminds its audience a widespread phenomenon existing negatively in the area of basic education in China, that is,_____ . That is to say,_____ . Such a practice is very harmful in terms of the following aspects.Firstly,_____ . Secondly,_____ . Last but not the least,_____ .

In my point of view,_____ , but it is only part of the picture. On the other hand,_____ . Therefore, it is an urgent task to_____ . As children are the future of our nation, creating a good environment for their upbringing means creating a bright and promising future for our nation.

According to the two pictures presented, it can be observed that. In the left picture,_____ . A the same time， as the right one shows. Different people have different views on_____

In my point of view, both sides are partly right. To thoroughly analyze this problem, we should take into consideration of all relevant aspects, so as to make the right decision. Therefore, my conclusion would be that_____ .